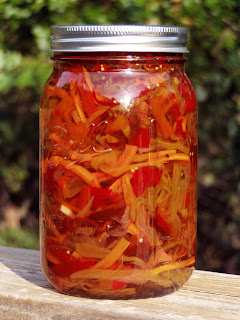 Anxious to pickle up the banana peppers, I began the process eagerly.  After an unwise choice of not wearing gloves when cutting up some hot peppers several years ago, I am very careful to slip them on even for jalapenos.  Did I consider wearing them for the banana peppers?  Yes I did, however, how hot can banana peppers be?
After slicing 3 quarts of them, my hands began to feel very warm.  I touched one of my fingers to my tongue (quick test to determine pepper heat, not exactly the smartest way)  and wow, I knew I was in trouble.  The rest of the evening was spent attempting to remove the heat from my fingertips and scolding myself for not using a little more
common sense.
The pickled banana peppers are for my dear father in-law who especially likes them, but I don't think he would be able to eat these.  Instead, I pulled out a recipe that normally calls for jalapenos, modified it somewhat and came up with some pretty jars of Sweet Pepper Salsa.  Don't let the name fool you though because of the hot peppers that are mixed in.
Sweet Pepper Salsa
3/4 lb. of hot garden peppers - your choice
1 medium yellow onion
4 medium carrots
1 large red bell pepper (Red Belgian Pepper)
1 large yellow bell pepper (Golden Treasure Pepper)
1 large chocolate pepper (Sweet Chocolate Pepper)
7 small sweet red peppers (Sweet Red Stuffing Peppers)
3 1/2 c. sugar
2 c. apple cider vinegar
1 Tbsp. yellow mustard seed
1 Tbsp. dill seed
Julienne all of the veggies in uniform widths and lengths when possible.  Cook the sugar and vinegar over medium heat until sugar is dissolved.  Add all of the veggies and spices.  Bring to a simmer and stir occasionally for 35 minutes until veggies are cooked down.  Jar up, leaving 1/4" head space and give them a hot water bath for about 15 minutes.
This stuff is incredible!  It can be put on hamburgers, meatloaf, sandwiches, burritos, tortilla wraps.....and many other ways that I haven't even thought of I'm sure.  It's a great way to use up the extra peppers in your garden.  Another idea is to chop the veggies up in small pieces and then this recipe would be good drizzled on crackers with some whipped cream cheese!
at 7:51 PM