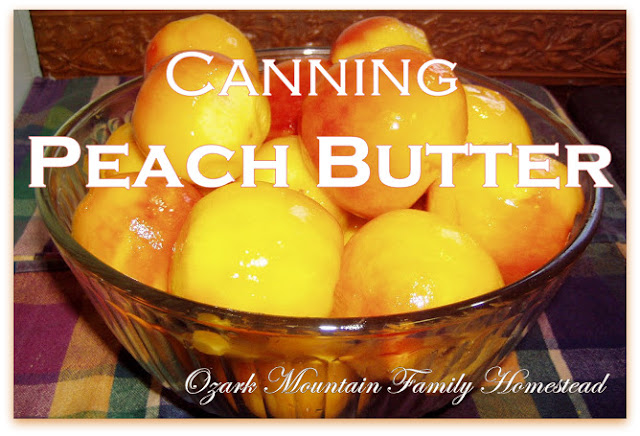 I absolutely love the changing seasons and each new harvest that the good Lord gives us.  We were blessed with getting some extremely sweet and juicy peaches this season and I decided to make a good sized batch of Peach Butter.  It was a new learning experience for me, but it wasn't too hard and now I've learned an even easier method than the one I used for the first two batches which I'll share with you.


For one batch of Peach Butter or Spiced Peach Butter you'll need
18 medium peaches and 4 cups of sugar.  That's it besides the right equipment.  It can't get any simpler than that!

To prepare your peaches you'll want to first wash them and then drop them into boiling water for 30 seconds.  Then scoop them out of the boiling water and drop them into a sterilized sink filled with ice water to stop the cooking process.  Peel, pit and chop the peaches.  As you can see below, I didn't exactly chop them, I just kind of tore them into pieces and put them in the pot. 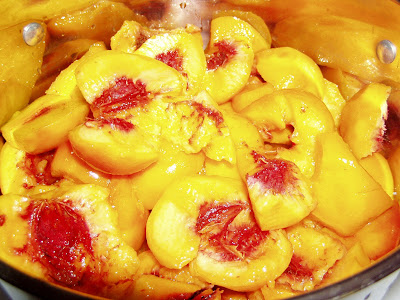 Cook the peaches until soft, adding only enough water to prevent sticking (about 1/2 cup).  The recipe says to then press the peaches through a sieve or food mill, but I just mixed them up in the blender about 1/2 a blender at a time.  Be careful doing this because of the steam.  The easier way I mentioned earlier, which I will share a link to, has to do with this part of the process.

Pour the peach pulp into a large pot and add 4 cups of sugar.  Cook until thick enough to round up on a spoon.  Now "round up on a spoon" sounds simple enough, but my mixture still wasn't doing that after more than an hour of simmering.  I think I had the heat on too low though. 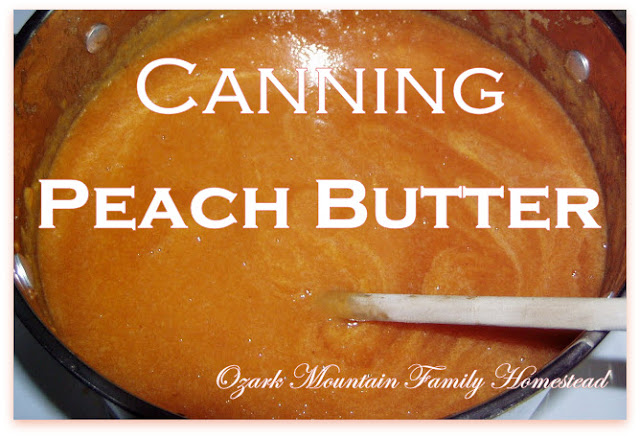 It never did "round up on a spoon" and it still turned out just like peach butter.  As the mixture thickens, stir frequently to prevent sticking.  Ladle hot butter into hot jars, leaving 1/4 inch headspace.  Adjust two-piece caps and process for 10 minutes in a boiling-water canner.  Makes about 4 pints or so.

Because I was having difficulty getting my mixture to round up on a spoon, I began to search for other recipes on the internet and found a much easier way to do it.  It consists of mixing your peaches and sugar into your crockpot and cooking it overnight for 6 to 12 hours on low.  Then mixing it with a stick mixer until it is the consistency you like.  I thought this sounded much easier, plus I had found a recipe for Spiced Peach Butter.....so I tried it out.

The difference between Peach Butter and Spiced Peach Butter is only that you add 1/2 to 1 teaspoon each of ginger, nutmeg and cinnamon with your sugar and peaches.  I began with only 1/2 teaspoon of each, but next year I will try the whole teaspoon of each.  I still put the peaches through the blender but then mixed it all up in the crockpot, turned it on low and went to bed.  The house smelled scrumptious when we woke up the next morning and the butter was done!  After breakfast I simply canned it up and water bathed it for 10 minutes.  The most time consuming aspect of this whole process was peeling the peaches and even that wasn't that hard.

Apple Butter is next on my list and you better believe it's going in the crockpot over night!  Here's the link to where I found the crockpot idea.  Be sure to look all over this site if you like to preserve food because she has so many good recipes and information regarding how many tomatoes, beans, fruit ect. you will need for how ever many quarts you would like to end up with.