Canning Corn on the Cob 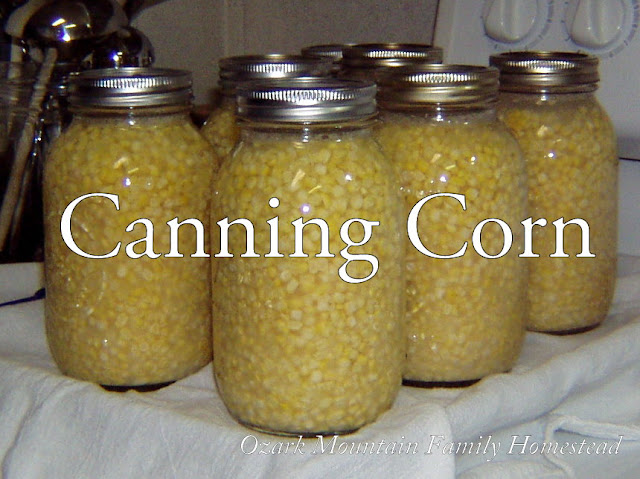 In all fairness, I have to say that canning corn hasn't been the easiest thing I've canned, but it will be MORE than worth it when the wind is howling and the snow is falling this winter.

I hope I don't scare you off by saying that because it really isn't a big deal to do.

Tip #1 - First of all, make sure you know where the corn has come from.  If you buy it from a roadside or farmers market stand beware.  Be sure and know what type of corn it is.  Corn is one of the biggest crops that has been genetically modified and you don't want to feed it to your family.


Tip #2 - If the ears of corn look incredibly perfect, walk away, it's been covered in chemical sprays, no matter what they tell you.  When it's organic corn, you will see a worm every once in a while.  That doesn't mean every ear will have worms, it just means that as you go shucking through a dozen ears, you might find a few worms.  Usually it is on the tips of the ears which you can just cut off.

Tip #3 - Be sure to ask when the corn was picked, the fresher the better.

When you get home with your corn, find a good place to shuck it.  This time around, I found an old empty box and shucked it inside the house due to the extreme heat outside.  Usually, we gather the chairs around in a circle on the front porch and have a "corn shucking" frolic.  Be sure to throw your scraps to the chickens, they LOVE scratching around in them.

Once the ears are shucked, wash them.  Run your hand down the ears or get a small veggie brush to help remove extra silks that didn't get pulled off.

Cut the ends off if needed.

Using a cookie sheet to catch the kernels, stand your corn on its end and cut the kernels off.

The way I do it is called the Raw Pack process, check your canning book for the Hot Pack process.

Fill your jars with the kernels, leaving about 1" (inch) of headspace.  Don't shake your jars to work the corn down and don't press it down either.  Fill your jars loosely.  Your corn will need the extra space as it cooks.

Add a teaspoon of salt per quart or 1/2 teaspoon per pint.

Pour boiling water over the kernels, leaving 1" (inch) headspace.  Remove any air bubbles by running a knife around the inside edge of the jar.

Wipe the rims of the jars, making sure they are clean and put your lids on.

Corn has to be processed in a pressure canner.  I process mine, using my steam pressure canner, according to my Ball Canning book which states 85 minutes at 10 lbs of pressure for quarts, 55 minutes for pints.  That is a long time so you might want to add a bit of extra water to your pressure canner so it won't boil dry.

Be sure to involve the family, have fun with it and enjoy God's marvelous bounty!