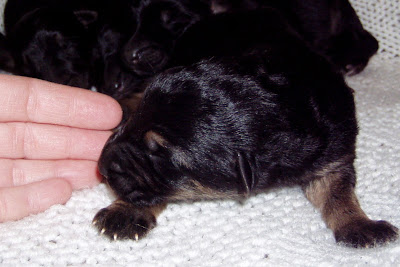 Our one and only litter of 2011 is now 5 days old!  We have created a new blog to post pictures of the puppies as they grow and develop, pictures of their parents and other ancestors, champion bloodline information and all of the fun stuff that goes on with a litter of German Shepherd puppies!

There is a blog button in our sidebar to take you directly to the Shannons Shepherds blog!  ENJOY !!!

The past several days here have been bitterly cold, snow on the ground and frost on every tree.  It makes for beautiful mornings and great days for baking, sewing, plotting out our spring gardens........countless things!  Yesterday we made our usual bread for the week and I finally had the time to take pictures of the process to share it with you.  This recipe is an old Amish recipe that I got directly from an Amish bishop here in our neck of the woods.  For some reason, his still tastes better than mine, but its still the best bread I've ever made.  He hand grinds his wheat, which I am not able to do until we get our mill.....if you're reading this honey....by spring would be nice!  Other than that, I make it the same way he does.
Gather your ingredients...

As you can see, I have been using my bread maker for mixing the dough.  I used to mix it by hand, but my hands don't take kindly to mixing bread dough with a skinny handled wooden spoon.  (Another thing for the wish list....a BIG handled wooden spoon.)  Since this entire recipe will not fit into the bread maker, I do it in halves for the mixing part.


You will add more flour as you go until it isn't sticky, about 3 more cups or so, you have to just figure as you go. 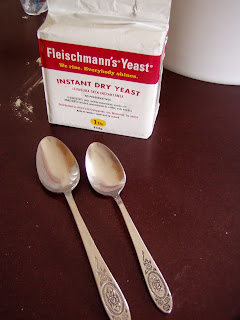 Now the smaller spoon pictured here is a regular table spoon, the larger spoon is the one we use for measuring the yeast.  You don't need a large serving spoon, just something in between a serving spoon and a regular spoon.

I put the ingredients into the bread maker in the order of the liquids first and then the dry ingredients, yeast last on top.  Make an indention in the top of the flour, big enough to contain your yeast.  I don't know if this is necessary, it's just a habit I have. 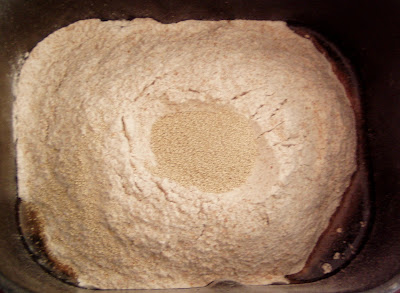 If you decide to use a bread maker for half of this recipe at a time like I do, just set your bread maker on the dough cycle, otherwise mix all of the ingredients together in a large bowl, continuing to add flour until the dough isn't sticky and then knead it.

I usually leave the lid to the bread maker open during this first mixing part to add flour about a half a cup at a time.  These next few pictures are a bit fuzzy due to the mixing of the machine, please excuse that.  you can see in the first picture that it is still runny so I'm adding more flour. 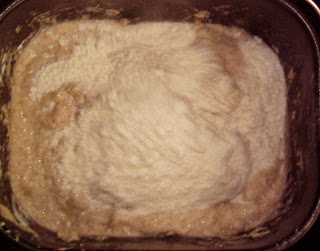 Here you can see the dough beginning to form and pull away from the bowl, I'm still adding a half cup of flour at a time.  It mixes in pretty quickly. 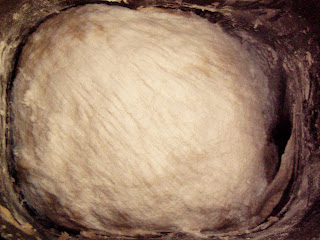 Here the dough has formed a firm ball and has pulled away from the edges.  It is still a bit too sticky, but I go ahead and turn it into a bowl. 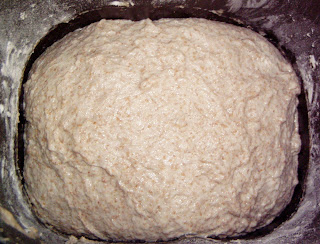 This dough is still too sticky, I can really tell now that it's in the bowl. 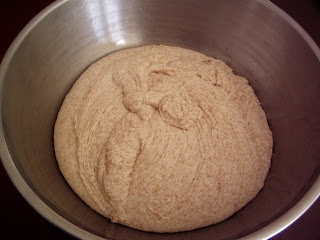 This time I add just one more half cup of flour, knead it slightly and the dough transforms into... 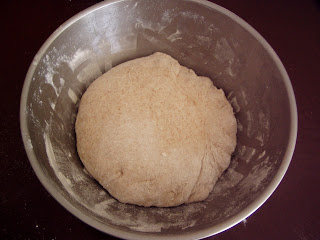 I let the dough rise for about an hour or so in front of the fireplace with a dish towel over it.  It should almost double in size.  At that time, I'll punch it down and then let it rise again for another hour or so. 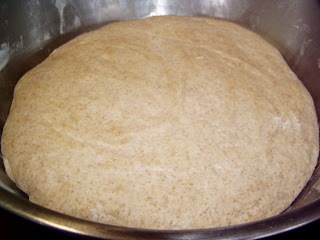 Now the dough gets turned out onto the counter and divided, placed into greased bread pans and let rise one more time.  Only let it rise till it is barely over the bread pans, otherwise you might get too much air in your bread.  I know some people poke holes in the tops of the dough to release the air before this rising step, I don't bother with that.

Bake at 350 degrees for about half an hour or so.

This batch isn't the prettiest batch I've ever made, but it is soft, hearty and delicious with soft crusts even without buttering the tops!  It's delicious smothered in homemade butter straight from the cow!
ENJOY !!!

I've tried to explain my process in detail, but when you do something so often, you tend to forget little things others may need to know.  If I have done that, please let me know and I'll gladly fill in anything I've left out :o)

Back to the Grindstone

The wonderful Christmas season has past, we finally put away all of the decorations today and its back to the books.  It feels good to gently settle back into our regular routine of home schooling even though this month we will add a lot of sewing time to balance out our book work.  Sewing is a nice way to compliment any curriculum, adding to many learning aspects including creative design (art), motor skills, reading, researching, math, history (in terms of historical clothing and home made items), home making skills, and science (what fabrics are made of and where they come from).  We somehow found the time to make several hand made gifts for Christmas, which in turn gave us more ideas of other things we would like to make and/or create.  Isn't that the way it goes though?  Once you are elbow deep in a project, it unlocks your creative mind and many other projects come into existence.

Also, even though our family is not a TV type family, we did discover some wonderful DVD's that are put out by Vision Forum on Creation Science that really compliment not only our learning in science, but our history and Bible study too.  Did you know that it is NOT against the law for a government school teacher to teach creation in their classroom?  They are strongly directed not to do it by most principals and school boards in order to avoid law suits, but by law, it is legal to teach creationism in the classroom.  Most teachers may not even know that.  I found that very interesting.

Another thing I recently listened to and appreciated very much was a CD called "What's a Girl To?"  How to Wisely Invest Your Daughter's Time by Douglas Phillips.  It was very eye opening and affirming all at the same time.  Here is the description of it.....A double-minded man is unstable in all his ways. The same is true of double-minded parents. Across America we have met evangelical parents who
Read More
at 3:53 PM 5 comments

Learning from the past and looking ahead 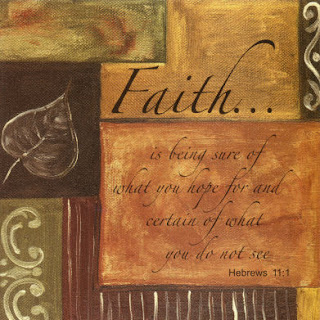 The past year has been full of wonderful memories and struggles of hard work physically and emotionally and much opportunity to learn from it all.  With every life giving moment, either in joy or sorrow, we are blessed.  Each step of our journey is taken in faith.
Looking into the next year, we are already planning where to make room for more garden area, what to plant, when to plant it, how to make some extra income from our homegrown and homemade things and the immediate pending chore is simplify, simplify, simplify.  God has placed this issue heavily upon my heart and it is my time to act on it.  Plus, just recently we faced some extremely strong, tornado producing storms where we did lose some fellow Ozarkers.  So much property lost and lives left to rebuild.  We were blessed
Read More
at 4:21 PM 2 comments