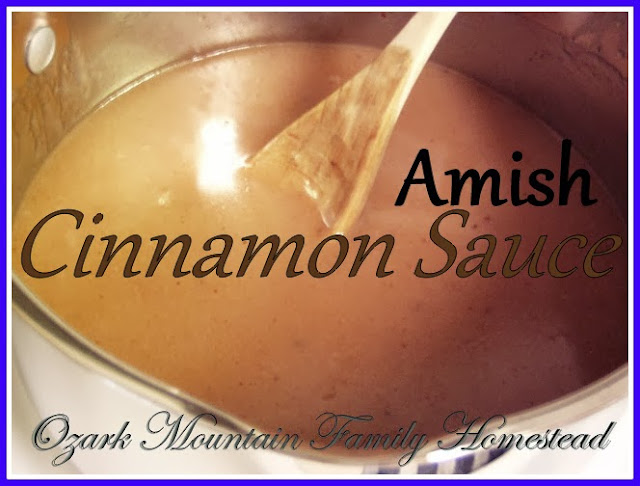 The other morning my dear family was cravings pancakes.  I've gotten on this anti-Bisquick kick, so I took out one of my Amish cookbooks, one like we just had a giveaway for, to see if there was a good sounding recipe for pancakes in it.

First let me say that there was, it was called Johnny Cakes and included a bit of cornmeal in it.  Second, to my delight, there was a delicious sounding recipe for Cinnamon Sauce.  My family really likes Cinnamon, so I read it over and thought I'd try it to have as an option to our Maple Syrup.

Not only that, but you could use it on more than just pancakes.  It could be used on ice cream, french toast, over sweet bread, the sky's the limit because it can be made just a bit thicker to be used as a frosting on cakes too.  Ok, here's the recipe:

Blend first 3 ingredients in a saucepan.  Stir boiling water in gradually to keep smooth.  Cook until clear for 4 to 5 minutes.  Remove from heat; stir in brown sugar, butter, and cinnamon.  Serve!  YUM!