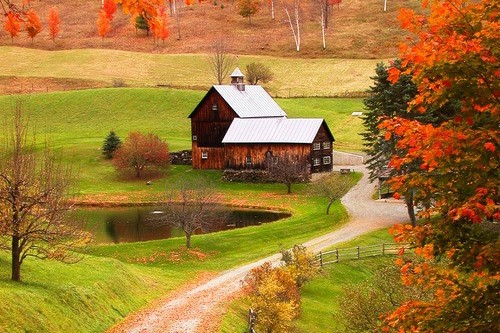 Source
This is not our place and I'm not sure where the picture was taken, but isn't it splendid?  I'm using it as my screen saver at the moment.....and wanted to share it with you.
I've been in this weird mood lately, feeling a bit out of sorts I suppose.  Thanksgiving is still a few days away, but everywhere you look, Christmas is in full swing.
Our family gratefully, enjoys celebrating Thanksgiving.
We love sitting around the table with LOADS of family and friends,
We love celebrating and being thankful for the bounty and family the Lord has graced us with,
We love the anticipation of the planning and preparing for this specific day of thanks,
We love the conversation around the table, catching up and growing deeper roots,
We love establishing a wonderfully celebrated time of thanks and gratefulness with our children so that they will know what and how to pass it on to future generations,
We love to celebrate the official end of the growing season (which doesn't count when you have a greenhouse that needs to be used to it's full ability and tends to get put to the side during this time)
HOWEVER......
For the past two weeks, the Christmas bell ringers have been at work.
The local Christian radio station has been playing Christmas music on Saturdays.
The Dollar stores, Wal-Mart and even the grocery stores have had Christmas things out since before Halloween.
I don't want to lose Thanksgiving, I don't want others to lose Thanksgiving.
I understand that Christmas is being introduced earlier and earlier every year (which makes me crazy).
This year though, it seems that even the fund raising began extremely early.  I remember last year that they were having trouble raising funds all over town, so this year they must've decided to start earlier in order to have more time to raise enough funds.  I'm all for raising enough funds to feed the homeless, to clothe the poor, to put shoes on the feet of public school students.....
but I don't want to lose Thanksgiving!
Having said all that, I must admit that I am guilty of visiting two different Christmas Craft Fairs yesterday......shame on me!
I do appreciate the other two being scheduled after Thanksgiving....
at 10:02 AM