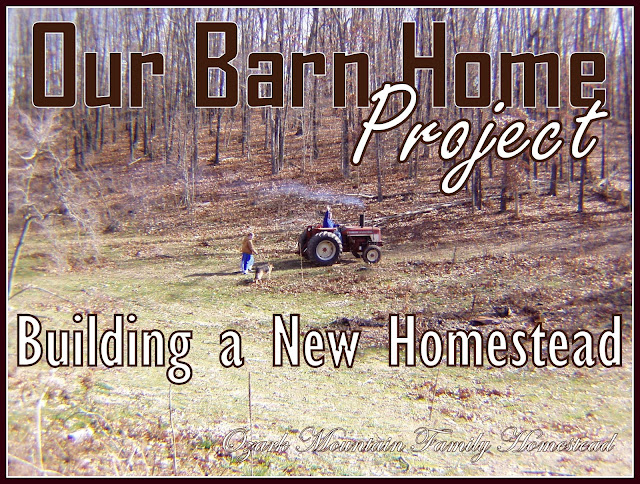 To begin with, I apologize for being so absent on this blog.  I realize some of you are not on Facebook and do not get those updates.  Last fall we began a journey of building a new homestead.  We knew before we started that is was not for the faint of heart, but still, we had no idea how trying it would be.


The intention was not to build anything fancy or anything that had "curb appeal", but for it to be functional, serve it's purpose, and most important of all, to be as debt free a project as possible.

First we had to choose a building site.  The choice wasn't all that hard since there is a beautiful, wooded outlook on the crest of our own personal Ozark Mountain.  The tricky part was figuring out how to get the well digger trucks, gravel trucks, concrete trucks and lumber trucks up to the top. 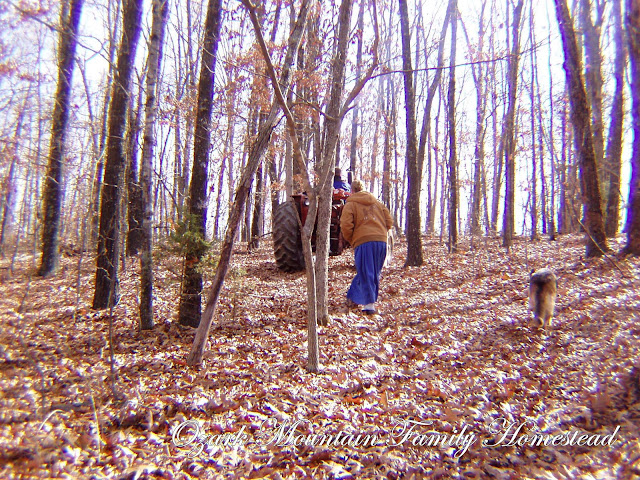 As you can see, it isn't even an easy walk up, but after much discussion, we decided to take it as it came and figure it out then. 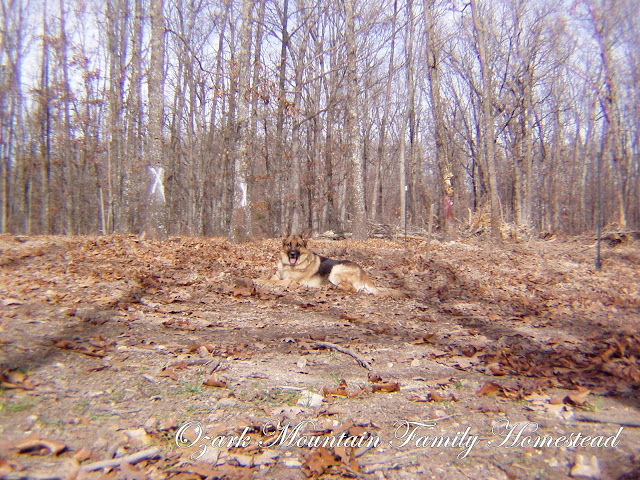 The next step in this process was to decide what type of building, what size, which way to face it and then we began to square it off and mark the trees that had to be removed.  In the above picture, you can see the trees are marked and a few fence posts marking the outside edge of the building.  Our faithful companion is always near, watching every move we make so she will probably be in several of the pictures I post throughout this process. 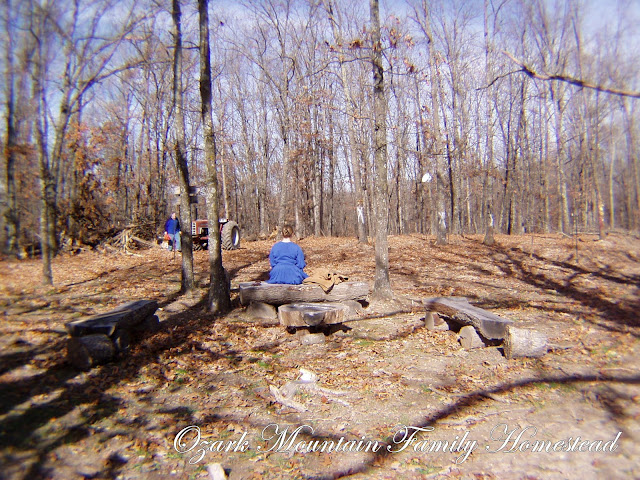 The outlook is very open as you can see a bit in the picture below, but the building was to be nestled in the trees so we didn't want to take out any more trees than absolutely necessary. 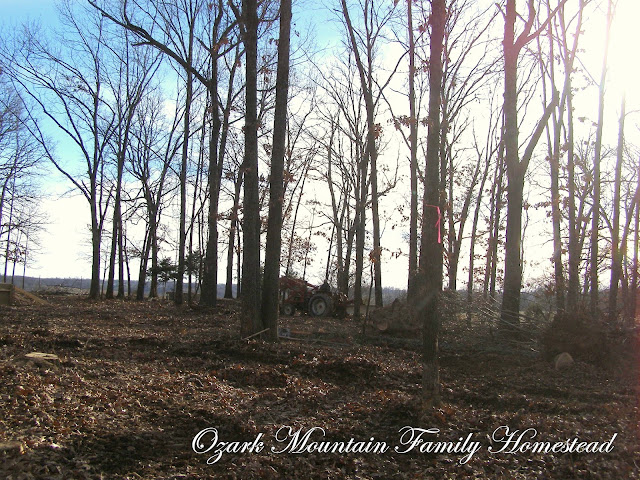 After getting the trees cleared for the building site, we were still waiting on the well diggers.  Due to the severe drought last summer, the well diggers were extremely busy putting in "government wells" that had been granted people who took a big hit regarding their livestock.  We were on a two month waiting list, which put us into the winter months sadly enough.  Ever hear of digging a well in the winter?  We were skeptical, but as we are always happily discovering, the good Lord does everything in His time.  By the time the well diggers could come out, the surface of the ground was frozen just enough for their massive trucks to get up our little mountain.  If they had come earlier, they wouldn't have made it.  Isn't God good? 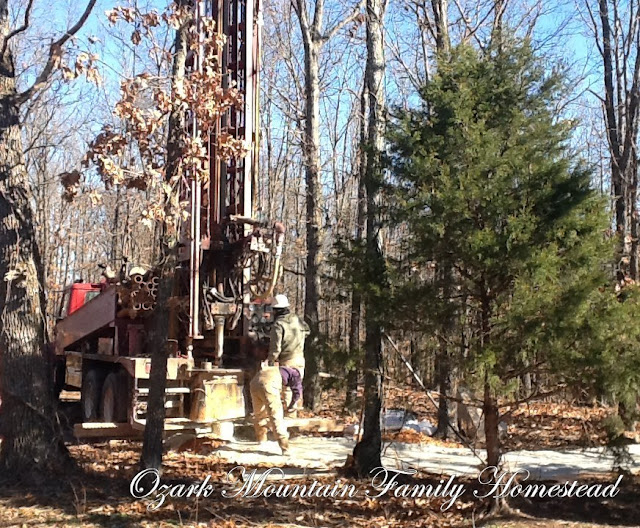 We rejoiced on this day!  Not only did they get up the mountain without *much* difficulty, but we were blessed with an abundance of water and pressure!  There was a small difficulty, but nothing a chainsaw and some strong men couldn't take care of.  The first route they tried was too steep.  The second route had a great oak in the center of it.  Sad to have taken it out, but it will serve a good purpose when we get the chance to lay the flooring in.  Every tree that was taken down will be used in this building.

Our other reason for being so excited about the well was because the builders couldn't begin building without access to water.  Now they could finally begin! 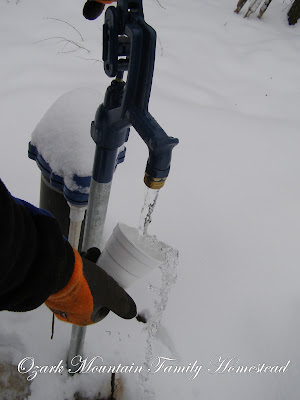 Our first cup of living water on our new homestead.  In a word.....  GLORIOUS.

Between the time that the well was drilled and the pump installed, we had a pretty good snow, but it didn't last very long and the builders were able to begin to figure out where to put the foundation and put the forms in place. 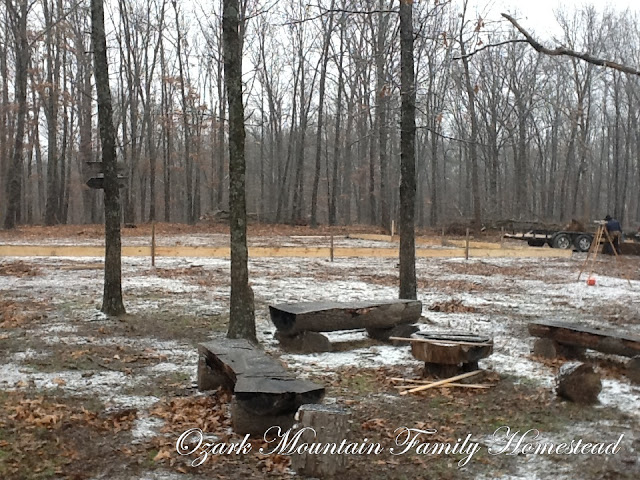 The temperatures were still pretty cold and the ground was still frozen, however, the gravel trucks were not as successful as the well diggers.  We had to have truck after truck come in and pour gravel all the way up to the building site.  I think that gravel company is still talking about that job ;-)  The trail was narrow, just enough room for their trucks and they had to take a lot of precaution not to jump their trucks sideways into a tree.  It took them two days to complete the road and fill the base of the building.  I'm sure you wouldn't even want to guess how many truck loads of gravel it took! 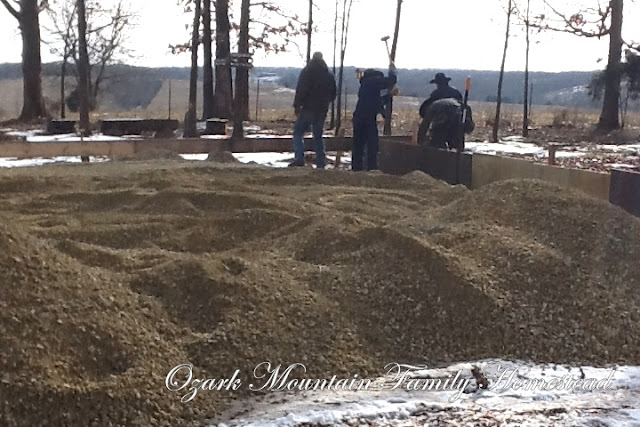 A tractor was used to spread the big pile left by the gravel truck into smaller piles, but the rest of it was spread out by hand.  It was a beautiful sight, as smooth as butter.  Then the tunnels were carved out for the plumbing and smoothed back over.  The rebar came after that in preparation for the concrete. 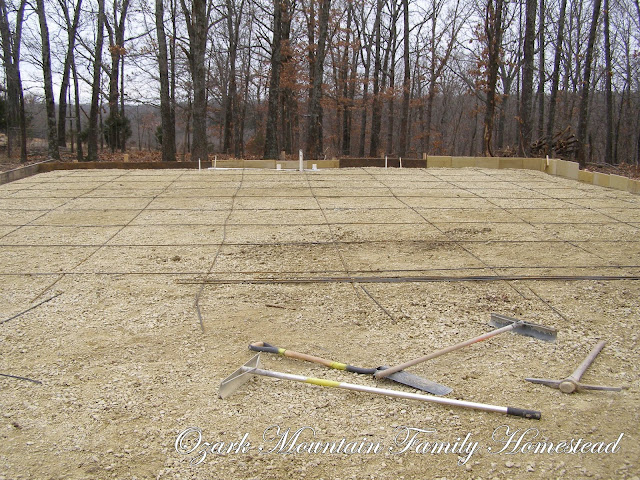 Now you'll have to excuse me, I am not familiar with all of the technical construction words.  After calling things by the wrong names for a few months, I gave up trying to figure it out.  Those builders don't know my sewing and canning terms, so why do I have to know what all their terms mean?  Anyway, like I said, don't mind me if a call something by the wrong name.  Like in the pic above, I see a shovel and two spreader things and a pic of some sort.  See?  Good enough.  Of course they just laughed at me and wrote me off as a goofy female.

I hope our process can be a benefit to others, so if you have any questions that I don't address in a post, please simply ask.

Be sure to watch for Part 2 when I get some more pictures sorted.....until then, have a blessed week!
at 5:04 PM