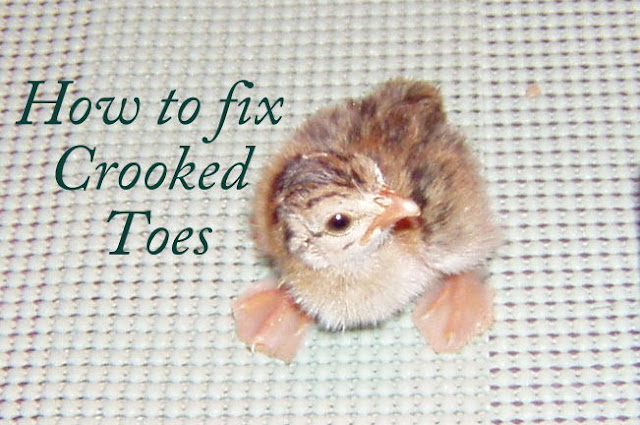 Before I tell you how to fix crooked toes, I have to tell you our egg story.

We have one guinea.  We have had only one guinea for a few years and she is the ugly duckling of the chicken coop, but she is the BEST when it comes to eating bugs and not destroying our garden.

Because of that fact, I decided to get some more guineas.  The first place I looked was on the ever famous Craigslist.  There were several for sale, but too far away to be worth making the drive.  I then began to search for guinea eggs.  We have hatched out many chickens and a few geese, so how hard could it be to hatch out guineas?  My conclusion of this was my first mistake.


On Ebay I discovered that you can just about find any type of egg you are looking to hatch.  Taking the necessary precautions regarding sellers on Ebay, I bid on a few auctions from one seller.  I should add, what I thought were two auctions.  The first auction I bid on was for a dozen eggs and I wanted a few more than that so I bid on another auction of a few dozen eggs.  I went back to check the first auction I had bid on and noticed that my bid had not been confirmed so I placed my bid again.  Everything seemed to be going great until I realized that all of the sellers auctions had the same picture on it.  I then went to double check the auctions I had bid on and realized I had bid on three separate auctions which added up to about four dozen eggs.  If you count the extra eggs the seller adds to cover any that break or simply to give you extra for extra's sake, I ended up with 60 eggs.

This all took place when the temps were over 100 here in the Ozarks and the seller lived in New Mexico.  I didn't think too much about it, but I now believe it was a serious count against me.

We happily filled our incubator and gave the extra's to some friends for them to have to hatch out for themselves.

After waiting for the incubation period, we only had 5 hatch out and 1 didn't make it.  Our friends hatched out 4 so that made 9 out of 60.  We were very disappointed.  The seller contacted us to ask how the hatch went.  We told her what had happened and she was very surprised and immediately sent us another two dozen eggs for free.  She was very nice and honest with us, telling us that most of the eggs she had sent that month hadn't hatched well.  She had hoped for a better hatch rate for us with as many as we had.  With the next shipping, she included a cool pack in the egg package.

We incubated two more dozen guinea eggs and so far, one has hatched.  I still don't believe it has anything to do with the quality of eggs she has sent because we have had some incubator issues and are surprised that any have hatched this time.

Now, if you have made it through my whole guinea egg tale of woe, I'll explain about the crooked toes.

This one lone guinea keet hatched out with feet curled into little fists.  We waited a few hours to see if they would uncurl, but they didn't.  So I turned to the internet for ideas of what to do.  We ended up with what you see pictured above by using: 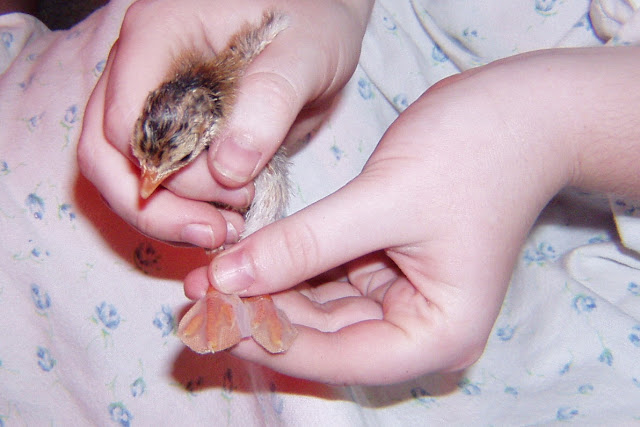 Have someone hold the keet and gently straighten the toes while you peel off the paper from one sticky end of the band-aid.  Stretch out the toes over the band-aid with sticky side up.  This is tricky and takes some time.  Next place a piece of scotch tape over the foot sticky side down.  Then CAREFULLY trim any extra.  The first time we trimmed it, we trimmed too much and the tape came off the top.  My concern is that if there is too much extra, the keet will have trouble walking.

The trick of getting this to work is to do this the first or second day after hatching before the bones harden.  Our little keet is standing beautifully and walking beautifully!  I would highly recommend trying this method for crooked toes on your keets or chicks.  If you have a gosling with crooked toes, you would need to use other bigger materials, but the same concept might work well too.  I would think that you could cut a small piece of cardboard the size of the gosling's foot as the sole of the shoe and then use some form of tape to keep it on.

Here is the LINK to where I got the original idea from and there is other good information for fixing splayed legs.  If you've had this kind of trouble and have a tried and true method, please leave a comment for everyone to learn from.