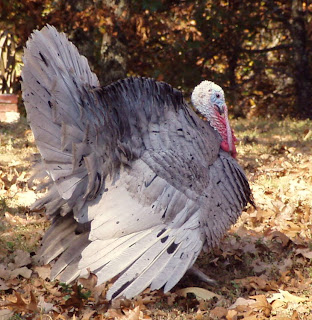 If you happen to be in our neck of the woods, and stop by for a visit, this fella might be the first one to greet you!  Meet "Supper", our pet turkey, watchdog, king of the hill and comedian.  He is a Blue Slate Turkey and he is a lot of fun......usually.  Last year, when we got a few chickens, I never thought about ever obtaining an actual turkey.
It wasn't anywhere on my radar.  If someone had asked me if I wanted one, my answer would've been a big flat NO.  We only got the chickens for the eggs, and a Tom Turkey obviously isn't any good for that purpose.  The trouble began when a neighbor friend of ours.....I won't mention any names, obtained a turkey with the intent of serving him for Thanksgiving dinner. 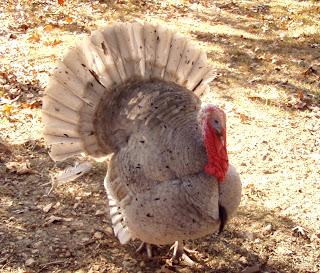 This neighbor of ours happened to run the local country store at the time, which had drawn much attention from the tourists due to its nostalgia, not to mention the flock of chickens that ran loose in the yard of the store.  Soon, the turkey brought onlookers with cameras......you'd think people had never seen a turkey before.  Some would even stop their car in the middle of the road, while "Supper" crossed it, to take pictures of him.  A few weeks before Thanksgiving last year, I began to wonder if my neighbor, was in fact, going to actually kill this great turkey.  After discussing this issue with him, it was clear that he had no desire to butcher the turkey, however, his dear wife sincerely thought he should (and had some rather strong comments about it).
Knowing my neighbor as I do, (he has the softest heart for all living creatures) I knew it would be extremely difficult for him so I presented him with a solution.  I would purchase him a frozen turkey for their Thanksgiving table in exchange for the live turkey.  After careful consideration....about half a second....he agreed to the offer.
We brought "Supper" home and then began to wonder what we, ourselves, would do with him.  We finally settled on getting a hen in the spring and raising baby turkeys.  Sounded simple enough.  Little did we know at the time, how fickle turkeys are.  We have nursed him through two different illnesses to the point of getting him medicine from the vet.
Even as I write this, I have to laugh.  Who would've thought?  The fact is, the ole' boy does our hearts good.  He gobbles early in the morning, which is a comforting sound, and he gobbles if someone pulls onto the property, not to mention that his antics keep us laughing too.
Everyone still asks when and if we are ever going to butcher him, but this ole' boy has the rest of his life to live out comfortably here on our farm.  He has become part of this family and his retirement here is his reward for the natural beauty and fun he provides us.  If anyone has any experience with Blue Slates, please let me know.
You can find me linked up at:  Homestead Revival, Growing Home, Skip to my Lou, Penniless Parenting, Raising Homemakers, Raising Mighty Arrows, Deep Roots at Home, Fingerprints on the Fridge, Farm Friend Friday
at 9:07 AM